THE POWER OF GIRL-CHILD EDUCATION 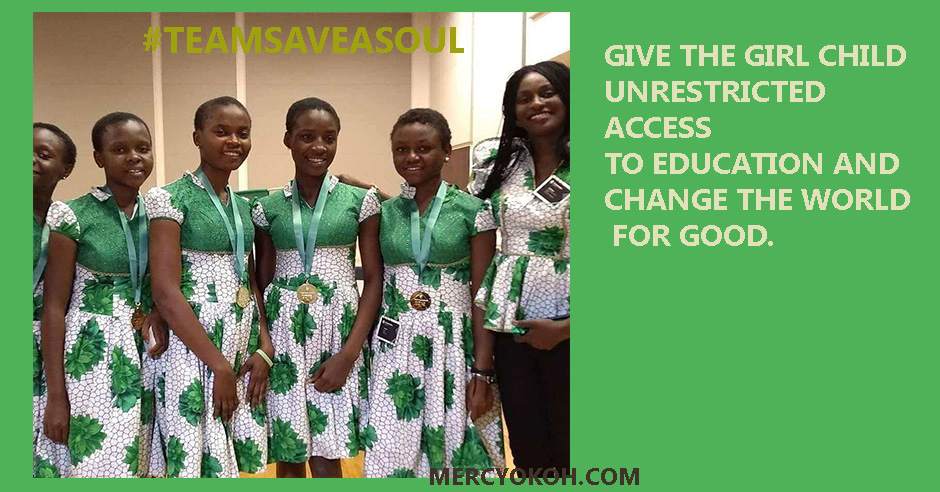 The most important gift you can bequeath the girl child is quality education. If we are really interested in the development and economic advancement of Nigeria, send every girl to school and watch the nation surge through heights unknown.

There should be no gender bias in the provision of qualitative education. The girl child ought to be empowered through education in order to contribute meaningfully to the development of her people. ‘A 2013 UNESCO fact sheet on primary schooling reported that in Nigeria about five and a half million girls of primary school age are not in school.’

Any country that wants to see meaningful development should educate both her male and female citizens. We should realize that the future of Nigeria lies with both her men and women working together in partnership.

Women are wonderfully crafted to succeed at whatever they do. They are home care-givers, mothers, leaders and nation builders. Desmond Tutu stated as a matter of fact “If we are going to see real development in the world then our best investment is women” This was further confirmed by Angela Thody’s remark, “The surest way to keep a people down is to educate the men and neglect the women.” In the words of Strive Masiyiwa “if you are planning for lasting change in this world, educate girls!”

Women should be allowed to have a voice in the nation by having unrestricted access to education thereby enhancing their self-worth and productivity. An educated woman, is an empowered woman! Empowered women are the bedrock of their families and the nation.

Recently, five Nigerian girls from Regina Pacis Model Secondary School, Onitsha, Anambra State, won the 2018 Technovation World Pitch competition in Silicon Valley, California. The young winners (ages 12-14), competing in a team they named “Save a Soul,” were: Promise Nnalue, Jessica Osita, Nwabuaku Ossai, Adaeze Onuigbo and Vivian Okoye. Due to the increasing number of deaths resulting from fake drugs, they developed the “FD-Detector” (Fake Drug Detector) mobile app which scans a barcode to help confirm that the drug is not fake, and also checks its expiration date.

Imagine if these girls were married off in early marriages without the opportunity of being in school, their ingenuity and contribution to reducing mortality associated with fake drugs in Nigeria would never have been discovered.

Let’s encourage girls’ education if we are interested in seeing a more politically and economically balanced Nigeria.

Girl child education is a right, not a privilege!