Complete life LIFE LESSONS THE GREATEST OF ALL TIME

THE GREATEST OF ALL TIME 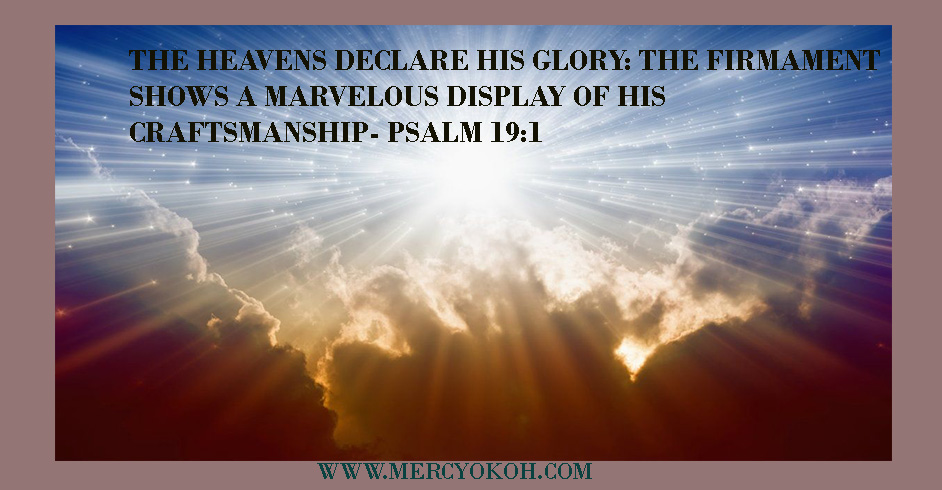 Have you ever wondered why there is no interruption to the routine of night and day? Why the Sun will not mistakenly shine in the night and the Moon in the daytime? The one who spoke them into existence is full of glory, honour, power and integrity. He’s a master designer and a grand architect of the heaven and earth. At creation, God revealed His greatness. “The heavens declare the glory of God; and the firmament shows a marvelous display of His craftsmanship”- Psalm19: 1.
Let’s look at some of the display of His greatness:
• Air: Oxygen constitutes 21 percent of our atmosphere; the precise balance of air we need to breathe. Why not 50 percent? Because the first time somebody lit a match we would all be toast! So ask yourself, is the 21% by accident or design?
• Temperature: The sun’s surface is 10,000 degrees Fahrenheit, and we are 93 million miles away from it – just the right distance. If the earth’s temperature was 50 degrees hotter or colder all life would cease.
• Rotation: The earth rotates 365 times a year as we pass around the sun. Suppose we only rotated 36 times? Our days and nights would be ten times as long. We’d be terribly hot on one side, unbearably cold on the other, and life would cease.
• Look at man the greatest creation by God and consider the magnificent intricacy of living cells in him.
‘Science is beginning to accept the fact that there is an intelligent design to the universe and if there is a design then there must be a designer.’
The greatness of a person is measured by service to others. God created the earth and made
everything in it comfortable for man. That’s service to humanity.
God created the earth in six days, parted the Red Sea, and made the walls of Jericho fall without a single blow. He’s awesome!
At creation God revealed His great power, but on the cross He revealed His great love for you.
God is great!
Excerpts:
• Bob and Debby Gass- The Word for Today, December 2018.
• https://www.sermoncentral.com/sermons/the-greatness-of-god-wayne-burnett-sermon-on-god-s-holiness-34251

Choose your friends wisely for they will either help you to succeed or be your downfall!     Let me ...

Focus on your abilities and not on your limitations.   It’s a pity that people want the best things ...

It’s a waste of precious time to worry. It keeps your mind busy doing nothing.   If it were possible ...