Complete life LIFE LESSONS PLEASE, SAY NO TO SUICIDE- LIFE IS WORTH LIVING.

PLEASE, SAY NO TO SUICIDE- LIFE IS WORTH LIVING. 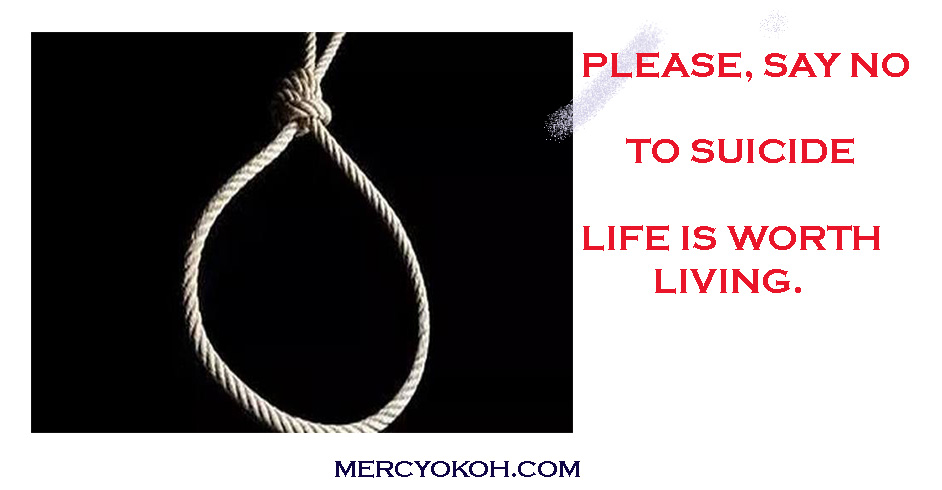 Suicide is the act of deliberating killing oneself. There is no reason that’s good enough why one should deliberately take his life, because suicide doesn’t help anyone but rather puts the family and friends of the person that has committed suicide in sorrow and pain. In the last six months, Nigeria has recorded 46 suicide cases, and most of the acts were recorded in university communities across the country. What baffles me is that the old are jostling for political positions, while the young and future leaders of tomorrow are committing suicide in Nigeria.

According to Richard Uwakwe, a professor of neuropsychiatry, ‘suicide is a complex issue that cannot be traced to a particular factor.’ The associated factors are:

 Mental disorders- this is responsible for majority of suicide cases, and the symptoms are mood swings, irritability, anger, intense sadness, loss of appetite, weight loss, difficulty in concentrating and statement of death among others.
 Social factors- worries about image and position in the society, trying too hard to belong, get rich quick syndrome, fear of failure, and the act of perfectionism.
 Environmental factors- the level of poverty, tough economic situation in the country, and appreciation for wealth instead of respect for hardwork and integrity.
 Physiological- this relates to the functioning of the individual. Chronic and terminal illnesses can cause some people to contemplate suicide
 Cultural factors- Some cultural practices have endangered the lives of their citizens. Some teenage girls have been pushed to suicide due to early marriages, unwanted pregnancies and inequality in sex.
 Emotional factors- heartbreak is about the leading cause of suicide among girls at the moment. Feeling of unworthiness and helplessness either from being jilted, lack of life partner, rape or other form of abuse, betrayal and lack of attention have contributed greatly to suicide among the younger generation. Recently, a 15 year old girl from a wealthy home dropped a suicide note for her mother before taking her life citing companionship as the problem. Her parents provided her with everything money could buy except their time, love and attention. Her uncle capitalized on her loneliness and sexually abused her all in the name of companionship.
 Social media factor- there are some online websites that encourage people over time to kill themselves. Corona School’s Trust Council notified the public on the game called “The Blue Whale” or “A sea of Whale”, which is a suicide online game believed to be a social media group encouraging people to commit suicide.
 Other factors responsible for suicide are genetic and legal reasons.
Please, let’s say no to suicide and yes to life! Whatever you are going through is only but a matter of time. Time heals all wounds! You did not create yourself, and so you can’t kill what you didn’t create. Life is beautiful and should not be wasted. Suicide is not a solution but a problem in itself.

Pay attention to the following words of wisdom: ‘Whatever is causing you to be suicidal will assuredly dissipate, so don’t be impetuous and end your life’- Kelvin Caruso
‘Suicide is a permanent solution to a temporary problem’- Prof Kingsley Akhigbe.

Here are some of the solutions to the issue of suicide:
 We should be our brother’s keeper and pay attention to people and their moods, words and actions.
 Parents and guardians should pay more attention to the physical and emotional needs of their children and wards. Family welfare is more important than any other thing.
 Money is not everything and everything is not money. The society should reward integrity instead of hallowing wealth.
 Visit the mental health expert early if you notice any of the signs of mental disorders and are having suicidal thoughts.
 If you are heartbroken, don’t turn to or seek respite in drugs or suicide, rather turn to God who heals the brokenhearted and comfort the weary.
 Use your words to bless people and not push them to death. Verbal abuse contributes to the increasing rate of depression and suicide
 Don’t believe everything you see on social media, and strive to belong or die trying.
 Care deeply and love others as much as you love yourself.
 Relationship is for mature minds. If you cannot handle love and heartbreaks, don’t venture into it.
 Work hard to earn a living; think big; but keep it simple. Life is for the living.
 Stop worrying over the future and enjoy each moment of today. Tell your problems to the right ears and receive wise counsel. They say a problem shared is half solved. Beyond that get professional help.

Are you going through trials or life ordeals? Suicide is not the solution! Seek help and hang on to life. Tomorrow will surely be better! As a matter of fact, you don’t have any right to take or sabotage your life- for thou shall not kill.

With long life will I satisfy you and show you my salvation.
Psalm 91: 16. 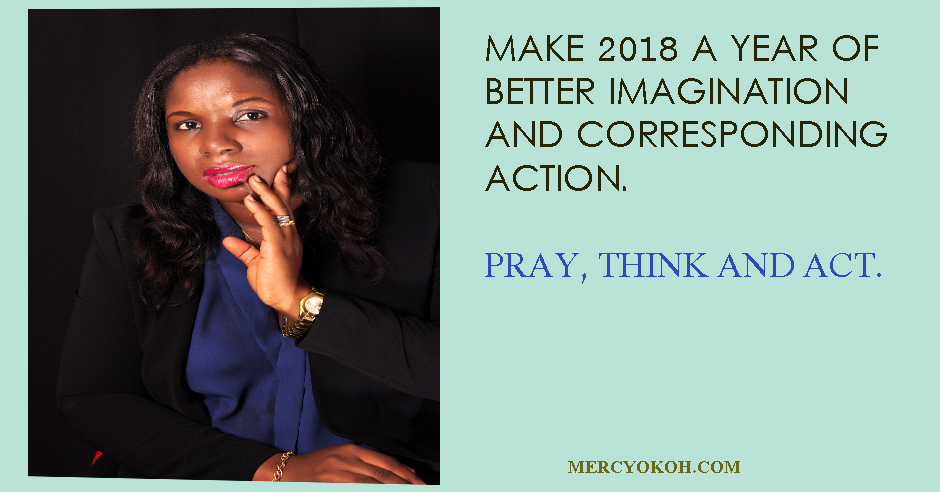 The year 2018 should be the year where you showcase your ideas, talents and dreams to the world. Maybe ...

Just move forward–that’s the way to go. Winners never quit!    It takes courage, discipline, and determination to actualize a ...

Nothing is as sweet as success, and nothing is as bitter as failure! We all want to succeed at something ...