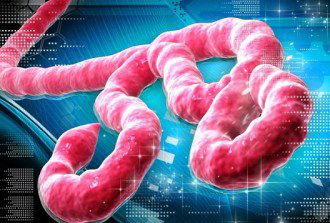 THE SCOURGE OF EBOLA VIRUS DISEASE IN AFRICA.

Ebola virus belongs to the Filoviridae family and is RNA virus. The virulence of the virus is almost entirely due to the surface membrane glycoproteins. The reservoir for the virus seems to be the fruit bats.
The first outbreak occurred in 1976 in Democratic Republic of Congo. The name of the disease originates from the town the disease was first recorded, which lies in the Ebola River.

The present outbreak started in March 2014, in Guinea. It’s the largest ever documented and the first accounted in West Africa with over 4,000 suspected cases, 2,000 death including 120 health workers. The World Health Organization calls it an emergency within an emergency.

Transmission to humans is thought to originate from infected bats or primates that have become infected by bats. Human-to-human transmission of EVD is known only through direct contact with the blood, secretions, tissues or other bodily fluids, including saliva, of infected people, and with environments contaminated with such fluids.

The incubation period, that is, the time interval from infection with the virus to onset of symptoms is 2 to 21 days. Humans are not infectious until they develop symptoms. First symptoms are the sudden onset of fever, fatigue, muscle pain, headache and sore throat. This is followed by vomiting, diarrhoea, rash, symptoms of impaired kidney and liver function, and in some cases, both internal and external bleeding (e.g. oozing from the gums, blood in the stools).

Supportive care-rehydration with oral or intravenous fluids- and treatment of specific symptoms, improves survival. There is as yet no proven treatment available for EVD.

Prevention include reducing the risk of wildlife-to-human transmission and human-to-human transmission. prompt and safe burial of the dead, identifying people who may have been in contact with someone infected with Ebola, monitoring the health of contacts for 21 days, good hygiene practices such as hand washing, personal hygiene, use of protective gears and maintaining a clean environment.

Although, there is no cure or vaccine yet, Ebola Virus Disease is not a death sentence, there have been recorded cases of survivors.